The World Is Noisy. These Groups Want to Restore the Quiet 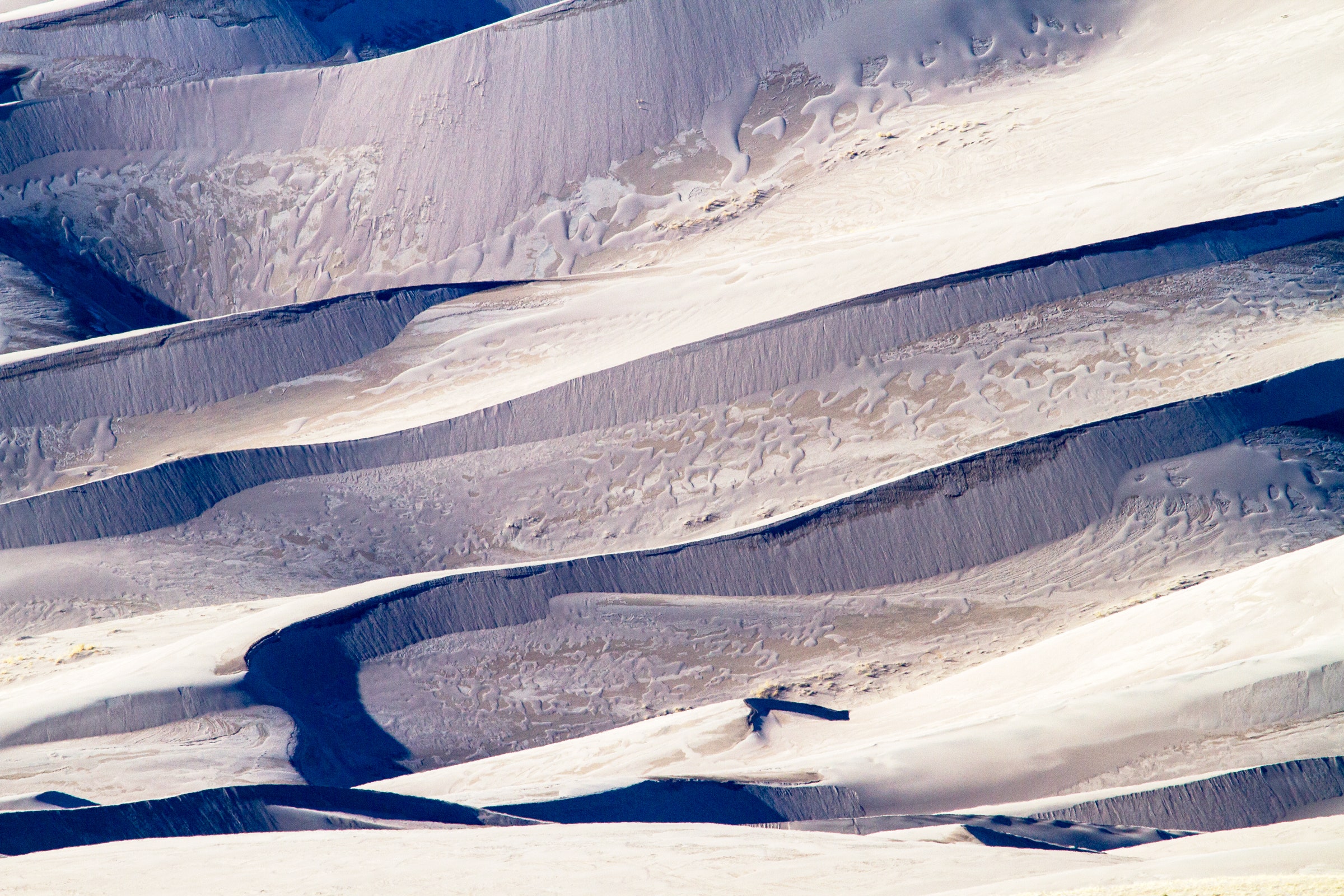 Silence is increasingly scarce, even in national parks. Now, scientists and environmentalists are working to calm the noise for the good of nature—and for us.

It is a frosty March morning in the Hoh Rainforest, deep within Olympic National Park in Washington state. The forest is full of Jurassic ferns, hanging moss, and towering spruce and cedars, but what I hope to find is an absence. I seek a spot known as the “one square inch of silence”—one of the quietest places in the contiguous United States, free from chattering people, humming power lines, and the whoosh of cars.

When I find the moss-covered log surrounded by a collection of red stones marking the spot, I listen. I hear the roar of the river and maybe a waterfall. There is an occasional bird song. And nothing else. I had worried that something would ruin it—that there would already be someone there, a plane would rumble overhead, or I would hear kayakers yelling on the river nearby—but as I sit and close my eyes, I can’t hear a single human sound. It feels amazing. I needed this quiet. We all do.

As the global population soars, cities and towns sprawl out, and roads stretch into even the most remote parts of the world, quiet is becoming increasingly scarce. The noise of buzz saws and trucks infiltrate deep into the Amazon rainforest. The blast of ship horns ring out over the Arctic Ocean. The US has become a highly developed landscape, with just a fraction of its original wilderness remaining, split up into parks and protected areas. Now, even in these refuges, cars, planes, motorboats, helicopters, and crowds contribute to the growing din.

In popular spots like Zion National Park in Utah, music blares in campsites and on trails. Hiker Erica Langston from Wilmington, North Carolina, recalls the end of a Zion backcountry hike in 2017: “We converged with a popular trail and could hear the human traffic from it well before we reached it,” with people playing music or yelling to be heard over the din,” she says. “The last few miles felt more like standing in line at Disney World than walking out of the woods.”

Part of the problem is simply numbers. National parks received over 327.5 million visitors in 2019, up 9 million from the year before. Yellowstone, Rocky Mountain, Joshua Tree, Acadia: Tourism is surging. While Covid-19 closures provided rangers and wildlife a temporary respite, federal parks are starting to reopen. In addition, people flocked to local parks and trails during the pandemic, raising noise levels in previously out-of-the-way spots. “If you want to go hiking on a weekend, be prepared to stand shoulder to shoulder,” says Laurabeth Roundy, a member of the Facebook group PNW Hiking with Kids who lives in Washington state.

Now, a growing coalition of environmental organizations, scientists, and grassroots activists are trying to protect and restore quiet places. Scientists at Colorado State University and the National Park Service are working to document where quiet has been lost and the most prominent drivers of noise in the places people go to escape it. Local activists in Hawaii and Washington state are petitioning policymakers to reduce or stop helicopter and plane flyovers near wilderness areas. And the nonprofit Quiet Parks International is turning public attention to the fragility of quiet by flagging remaining quiet areas as worthy of special protection.

Human-created noise is more than annoying. Decades of research has implicated it in a host of chronic health conditions, including low sleep quality and high blood pressure, as well as increased risk of heart attack or stroke, diabetes, and even cancer. “Noise is a known psychological and physiological stressor,” says Marie Pedersen, an epidemiologist at the University of Copenhagen who studies how environmental exposures affect pregnancies and children. Wildlife is affected too: Studies show that the auditory landscape is a key component of habitat, and human noise masks critical sounds. Animals listen for prey, predators, and territorial alarm calls, to locate group members, and to find mates.

“The absence of noises, replaced in parks by the sounds of leaves crunching under shoes or birds creating their own symphonies, is what draws so many of us to them,” says Rob Smith, northwest regional director of the nonprofit National Parks Conservation Association (NPCA). “Yet even these values are under threat. There is definitely a growing awareness of the importance of protecting parks’ sounds … so they can continue to be useful places of refuge.”

The movement in the US follows an almost two-decades-long effort in Europe to protect quiet areas. In 2002 the European Union approved an Environmental Noise Directive that set out goals for determining noise levels and exposures across Europe, making this data publicly available, and working to prevent and reduce environmental noise. In 2014, the European Environment Agency recommended the creation, identification, and protection of “quiet areas.” As of this year, 85 percent of reporting EU countries have established “criteria for designating quiet areas in their territories,” and 60 percent have “designated at least one quiet area.” They include places like Blessington Basin in Ireland, Lake Bäcksjön in Sweden, and Tondiloo Park in Estonia.

In Washington state, the NPCA is working to protect the natural quiet of Olympic National Park, where starting in 2008 a nearby Navy base began sending noisy Growler jet training flights over it. “These Growler fighter jets are among the loudest jets in the sky and fly frequently over the park, disrupting visitors and wildlife,” Smith says. The NPCA is petitioning the Navy’s Northwest commander to stop the flyovers, developing a Growler Tracker app to build a noise map with visitor input, and suing the Navy over failing to comply with a Freedom of Information Act request for the Navy’s research on the impact of Growler noise in the park.

Quiet Parks International (QPI) is a nonprofit working to establish certification for quiet parks to raise awareness of and preserve quiet places. The fledgling organization—whose members include audio engineers, scientists, environmentalists, and musicians—has identified at least 262 sites worldwide, including 30 in the US, that it believes are quiet or could become so with management changes. Great Sand Dunes National Park in Colorado and Haleakalā Crater in Hawaii are two of them. According to the Great Sand Dunes resource manager, Fred Bunch, the dunes are so quiet that when the Park Service monitored sounds in the area, noise levels often fell below their equipment’s measurement threshold. Other places flagged by Quiet Parks for certification are Doñana National Park in Spain, Ballycroy National Park in Ireland, and the Wadi Rum Protected Area in Jordan.

QPI has no regulatory authority, but like the International Dark Sky Association’s Dark Sky Parks initiative, the nonprofit believes its certification—granted only after a detailed, three-day sound analysis—can encourage public support of preservation efforts and provide guidelines for protection. “The places that are quiet today … are basically leftovers—places that are out of the way,” Quiet Parks cofounder Gordon Hempton says.

The group’s biggest success so far is the April 2019 certification of its first Wilderness Quiet Park, Zabalo River, in Ecuador’s Amazon rainforest. The designation has helped to boost tourism to the region, bringing travelers who seek the experience of a pristine auditory environment. QPI organizes limited tours to the area, guided and hosted by local Cofán people.

In the busy summer months, Zion, Denali, and Rocky Mountain National Parks now run shuttles, which reduce vehicle traffic inside the parks. Other parks, such as Canyonlands in Utah, restrict numbers with permit-only visitation. The Park Service is working with the FAA to reduce airline noise over some areas. Drones are prohibited in all but a few national parks, and there are limits on snowmobile tours in winter, following public outcry in the late 1990s about snowmobile noise pollution in Yellowstone.

The Boundary Waters Canoe Area nature preserve in Minnesota is a place of continued conflict between those who prioritize auditory solitude and those who favor motorized recreation. The Boundary Waters Canoe Area Wilderness Act of 1978 enacted a compromise, restricting snowmobiling and mining, but allowing motorboats on 16 of the refuge’s 1,100 lakes. Today, permits are required, with daily and weekly restrictions, and no more than nine people and four watercraft are allowed together in the wilderness.

In California’s Muir Woods, staff put up signs asking people to be quiet as part of a study by the Park Service. “And people listened!” says Rachel Buxton, a researcher focused on noise pollution at Carleton University who was not involved in the research. “All it took was putting up a couple of signs in the middle of the forest grove, and sound levels dropped.” The findings indicate people are willing to accept trade-offs, like limiting conversations, staying off of certain trails, and having signs and rangers present, to preserve the auditory experience of nature, Barber says.

I think of that spot in the Hoh Rainforest, where I sat aware of the crack of each twig under my feet, and the sound of my own breath. As with the planet’s visual gems, people are now beginning to understand that sounds also matter, that the experience of natural sounds—wolves howling in the distance, the dawn chorus of birds, or steam hissing from the earth—is worth protecting too.

All Rights Reserved for Jenny Morber