Will the Hydrogen Revolution Start in a Garbage Dump? 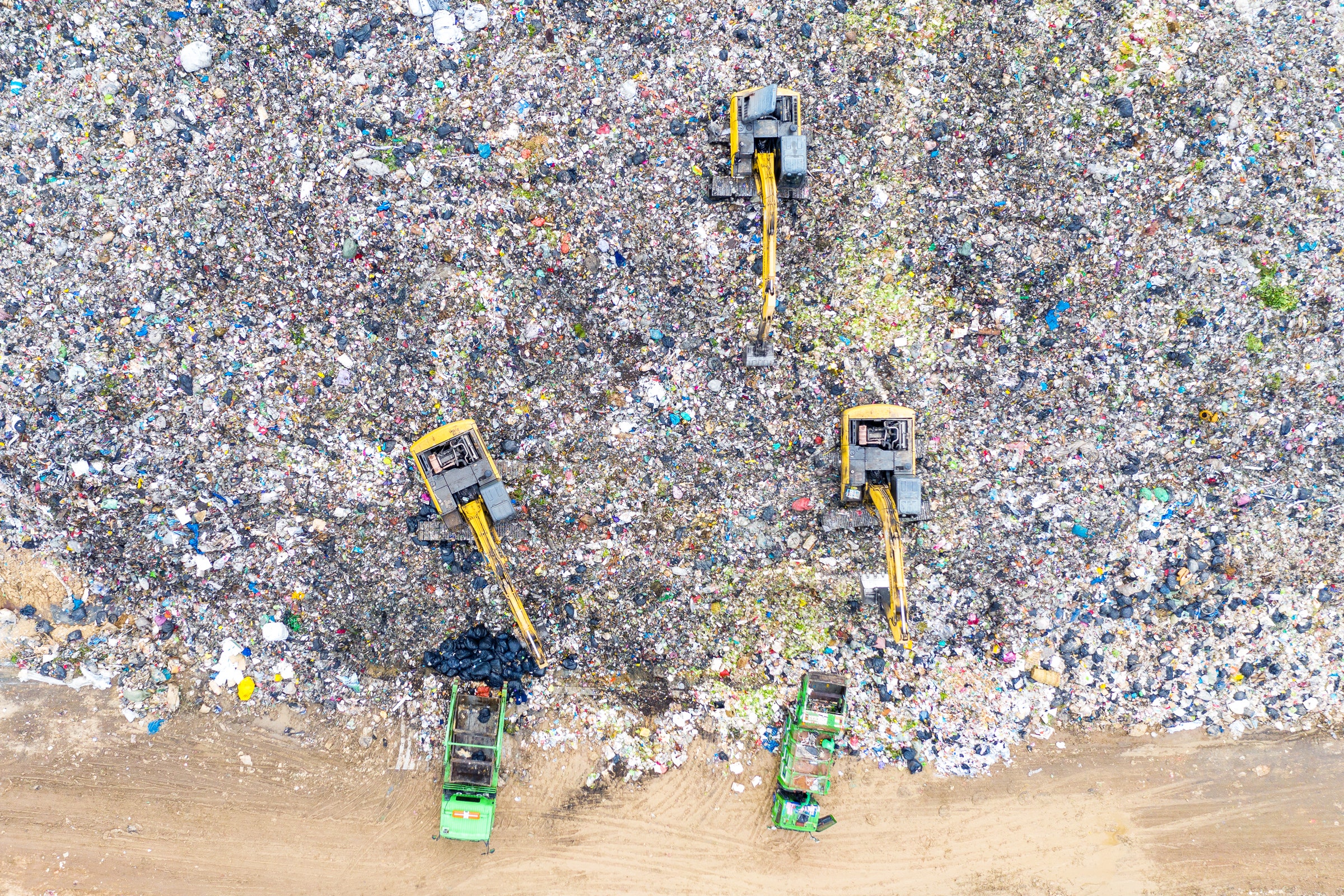 American companies are racing to commercialize technologies that can turn almost any kind of waste into clean hydrogen fuel.

A sprawling ziggurat stuffed with 130 million tons of trash cuts into the hills above East Los Angeles, towering over the city like a monument to American excess. The Puente Hills Landfill hasn’t accepted new waste in nearly a decade, but it remains the largest dump in America and a significant producer of greenhouse gases. Every minute, Puente Hills releases 30,000 cubic feet of landfill gas, a noxious mixture of carbon dioxide and methane created by microbes devouring the dump’s organic matter.

Most of the landfill gas at Puente Hills is captured by a network of subterranean pipes and used to generate enough clean electricity to power 70,000 homes. But Jean-Louis Kindler, the CEO and founder of a startup called Ways2H, still considers this letting our waste go to waste. If he has his way, we’ll have no need for landfills like Puente Hills. Instead, he wants to use the world’s trash as the raw feedstock to produce hydrogen, the perennial Fuel of the Future that could power our homes, planes, cars, and plane-cars. “There is so much waste available—plastic, municipal solid waste, medical waste,” says Kindler. “All the things we are really struggling with processing are loaded with hydrogen.”

Kindler was born in France and spent the better part of his career working on clean energy technologies in Asia, but these days you’ll find him in Long Beach, about an hour’s drive south of the Puente Hills dump. This is the headquarters of Ways2H, a company Kindler founded to commercialize a waste-to-hydrogen technology he helped pioneer in Japan nearly two decades ago. In partnership with the Japan Blue Energy Company, Kindler developed a system that can extract hydrogen from most kinds of trash, whether it’s sewage sludge or old tires. And last month, he announced that Ways2H had partnered with an engineering firm to build a first-of-its-kind commercial waste-to-hydrogen facility in central California.

The Ways2H system is similar to the types of gasification plants that are already used to convert trash into energy around the US, but with a few key differences. First, waste is sorted to remove materials without carbon or hydrogen (think glass and metal), dried, and shredded into one inch pieces. Then it is fed into a vaporization chamber that heats it to over 1,000 degrees Fahrenheit to produce syngas—a mixture of hydrogen, methane, and carbon dioxide—that can be used as fuel or further refined. The Ways2H system increases the hydrogen concentration in the syngas by mixing it with steam, which creates a mixture that is about half hydrogen and half carbon dioxide. The hydrogen is then filtered out using a commercial pressure-swing absorption system, a tank filled with absorbent materials that soak up the carbon dioxide like a sponge. The entire system sits in an open air tower that is about seven stories tall.

“Gasification works very well with identified feedstock like coal or wood chips,” says Kindler. “But when the feedstock is more complex and unknown, like municipal solid waste, it’s less predictable, and the temperature in the reactor is very hard to control.” He says one of the main innovations of the Ways2H system is the use of small ceramic beads that are fed into the vaporization chamber with the trash and used to regulate heat. These “heat carriers” help stabilize the temperature in the reactor and allow operators to be indiscriminate about the types of waste it consumes. “We can take anything, as long as it contains carbon and hydrogen,” Kindler says.

For every ton of waste fed to the Ways2H pilot plant, Kindler says, he expects it to produce about 100 pounds of carbon-neutral, or “green,” hydrogen. Although the system’s main byproduct is carbon dioxide, the process is considered carbon-neutral because the amount of CO2 released by the plant equals what was in the feedstock. But Kindler says it would be straightforward to integrate a carbon capture and storage system at the facility, which would make it carbon-negative.

Kindler says he expects the Ways2H facility to be finished by the end of the year and to begin supplying hydrogen to customers by early 2021. If he’s successful, it will be the first waste-to-hydrogen plant of its kind in the US. But Ways2H is hardly the only company racing toward this goal. A company called SGH2 is also building a waste-to-hydrogen facility in California that uses a similar gasification system to produce ultrapure green hydrogen. Other companies, like the startup Standard Hydrogen, are looking further afield for chemical processes that can produce clean hydrogen.

Earlier this year, Florida-based Standard Hydrogen unveiled a tabletop prototype of its reactor, which can extract hydrogen from hydrogen sulfide, an extremely toxic byproduct of refining oil and natural gas. The reactor implements a modified version of the Claus process, a 100-year-old technique for extracting sulfur from hydrogen sulfide. (Most of recovered sulfur is used to make sulphuric acid, which is used for manufacturing everything from dyes to explosives.) In the Claus process, the hydrogen is lost because it binds with the oxygen in the reactor to form water. But in Standard Hydrogen’s process, oxygen is expelled from the reactor and both the hydrogen and sulfur can be recovered.

For now, the Standard Hydrogen reactor exists only as a cylindrical prototype that’s about the size of a fire extinguisher, but Mintzer says the company is in the process of negotiating partnerships with companies that are interested in using the system to process waste or procure hydrogen. If the negotiations go well, he expects Standard Hydrogen’s first pilot plant to come online in early 2021. “There are no more feasibility studies, no more attempts to see if the chemistry works,” says Mintzer. “This is real. It’s here now.”

The technologies may work, but the crop of startups racing to turn the world’s trash into clean hydrogen still have to face the ultimate judge and executioner: the free market. For the past few decades, the main barrier to scalable green hydrogen production in the US has been economic and political, not technological. At the beginning of the 21st century, hydrogen was touted as a way to reduce American dependence on foreign oil; the Bush administration literally called it “Freedom Fuel.” But the fracking revolution in the US created a glut of cheap natural gas that priced out domestic hydrogen programs before they had a chance to get started.

“The energy security argument for hydrogen doesn’t make much sense anymore,” says Daniel Simmons, the Department of Energy’s assistant secretary for energy efficiency and renewable energy. “But hydrogen has always been a very flexible fuel that can be created from a variety of sources, and that flexibility is looking very attractive these days.”

Almost all the hydrogen produced in the US today is so-called “gray” hydrogen, which means it’s produced from fossil fuels like natural gas. The rest is produced by electrolysis, which uses electricity to break water molecules apart into oxygen and hydrogen. Electrolysis can be carbon-neutral if the electricity is produced by renewable sources like wind or solar, but this green hydrogen is still up to five times more expensive to produce than gray hydrogen. “We really need to drive down the cost,” says Simmons. “One of the ways to do that is very-large-scale hydrogen projects.”

Earlier this year, the Department of Energy announced $64 million in new funding as part of its H2@Scale program, which is designed to support R&D on scalable green hydrogen projects. The DOE’s call for proposals highlighted six main research areas, including manufacturing techniques for hydrogen storage tanks and fuel cell development for heavy-duty vehicles. But in terms of actual hydrogen production, the DOE is largely focused on improving electrolysis technology.

“Electrolyzers are already being deployed,” says Sunita Satyapal, director of the US Department of Energy’s Hydrogen and Fuel Cell Technologies Office. “To reduce cost we also need to improve their efficiency, because most of the cost of hydrogen is the electricity.”

Satyapal says the efficiency of electrolyzers is currently around 60 percent, but the DOE wants companies to find ways to boost it past 70 percent. At the same time, agency officials want to double the average lifetime of electrolyzers to around 10 years of continuous operation, which is necessary to ensure they’re cost competitive with gray hydrogen and natural gas. DOE officials may see electrolysis as the fast track to scaling hydrogen production, but they’re also investing in other pathways, including waste-to-hydrogen technologies. Last year, the agency awarded $1 million to researchers at Oregon State University to develop a reactor that uses microbes to produce hydrogen from biomass like food scraps and wood chips.

“Waste-to-hydrogen approaches would be regionally specific, limited by the content and amount of the waste feedstock available,” says Simmons. “This is in contrast to electrolysis, where the major feedstock is water, which is more generally available. Nonetheless, interesting regional opportunities exist for leveraging waste streams.”

Not everyone is convinced that waste-to-hydrogen solutions can make a significant contribution to scaling green hydrogen production in the US. Thomas Koch Blank, an industry and heavy transport analyst at the Rocky Mountain Institute, a nonprofit clean-energy research organization, says issues with waste availability could be a major barrier. He points to Sweden and Norway, two countries that invested heavily in waste-to-energy systems and quickly faced a garbage shortage as the demand for trash outstripped supply. Today, both countries import their trash from elsewhere in Europe to feed their waste-to-energy systems.

“I’m not saying it’s a bad idea,” says Koch. “It’s good to have a productive secondary use for our waste streams. But I have a hard time seeing that source for hydrogen scaling to be truly relevant in the big scheme of things.”

Neither Kindler nor Mintzer claim their waste-to-hydrogen systems will be enough to support the growing demand for hydrogen on their own. Instead, they see it as a technology that can work in tandem with other hydrogen production techniques while also helping the US get a grip on its mounting waste problems. “We badly need more hydrogen, and at the same time we need to get rid of the waste that’s piling up,” says Kindler. “Waste-to-hydrogen is a pathway that will complement hydrogen production with electrolysis. Every hydrogen production solution needs to coexist.”