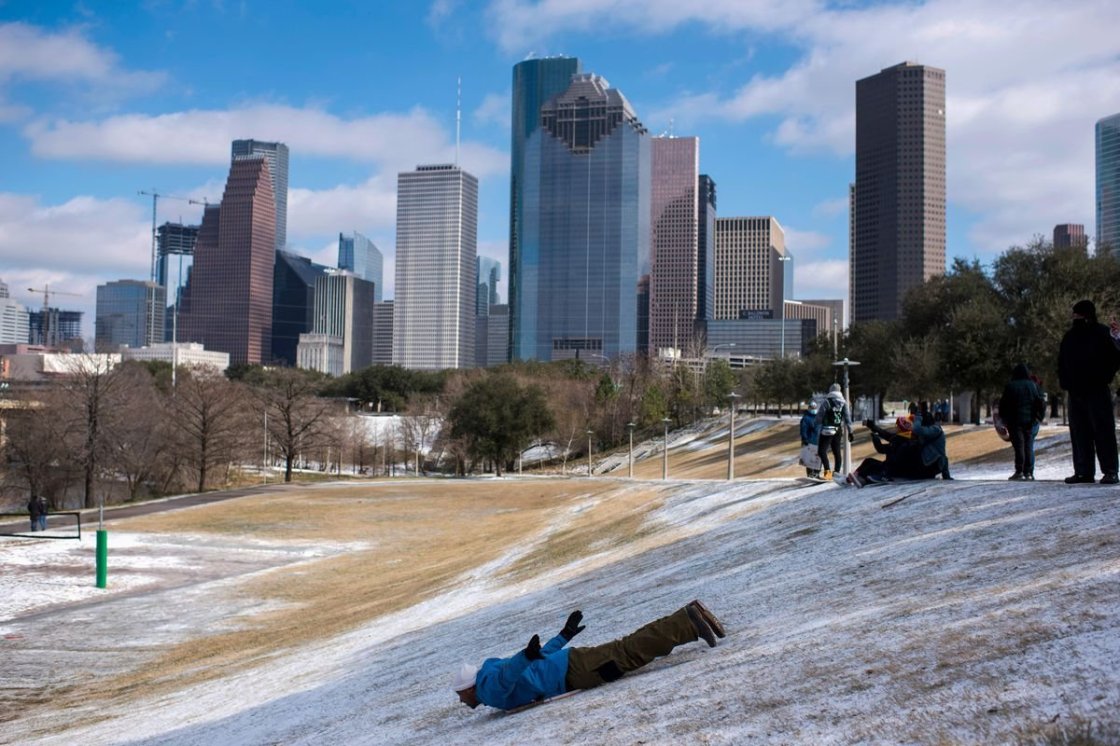 Is the cold wave that froze Texas this week a unique event or a sign of what’s to come?

Winter Storm Uri scattered bitter cold, snow, and ice this week across a huge swath of the United States, including places that rarely see such extreme low temperatures.

States like Texas with milder winters were caught off guard by the chill, which led to a massive spike in energy demand and a huge drop in available electricity as the infrastructure around natural gas, coal, nuclear, and wind energy froze up. Tuesday was the coldest day in North Texas in 72 years, with the Dallas-Fort Worth area reaching a record low temperature of minus 2 degrees Fahrenheit this week.

The cold weather has triggered a wave of blackouts across Texas, leaving millions of residents shivering in the dark. In some places, Texans have been without power for days.

Public officials and utility customers want to know why the Texas power grid wasn’t better prepared. And to get ahead of the next extreme event like this, it’s also important to ask what the chances are of something like this happening again.

With average temperatures rising around the world due to greenhouse gas emissions, there is more heat in the global climate system. That’s already having some predictable impacts, like an increase in the frequency and intensity of heat waves.

But it may be having some counterintuitive effects as well, especially during colder seasons. How climate change will reshape winters is, as scientists like to say, an area of active research.

There are a couple of competing ideas for how more warming will change the likelihood of extreme cold periods, like the frigid weather currently gripping much of the US. One group of researchers says that warming will make such events less likely, while another says that warming in the Arctic will increase the chances of frigid polar air spilling further south, leading to more periods of extreme cold in the near term.

“I would say it’s still pretty controversial and it has been for quite a while,” said Walt Meier, a senior research scientist at the National Snow and Ice Data Center at the University of Colorado Boulder.

But as Texas shows, failing to prepare for winter weather extremes can be devastating, so it’s critical to find out what scenarios could be in store and how often they’ll occur.

Just like heat waves in the summer, a prolonged drop in temperature in the winter is a distinct meteorological phenomenon. The American Meteorological Society defines a “cold wave” as “a rapid fall in temperature within 24 hours to temperatures requiring substantially increased protection to agriculture, industry, commerce, and social activities.”

And like heat waves, what counts as a cold wave depends on the local climate. The temperature threshold for a cold snap in Alaska is much lower than that for Arkansas.

Several factors have to align to cause a temperature drop like the one surrounding Winter Storm Uri, and some of them can gain momentum months in advance and from far away. Karin Gleason, a climate scientist at the National Centers for Environmental Information at NOAA, said the warning signs for the recent cold in the US started emerging weeks ago. “Certainly for this particular event, we can actually say there are some origins in January,” she said.

Ordinarily, the freezing air of the Arctic remains over the North Pole encircled by a fast-moving narrow band of winds between 5 and 9 miles above the Earth’s surface. These winds, which can reach 250 mph, are known as the jet stream. The jet stream acts as a barrier between the spinning cold air in the north, known as the polar vortex, and the warmer air to the south.

Meier likened the jet stream to a rim around a bowl, keeping the cold, dense air of the polar vortex in place. “Cold air is heavier, so it kind of gets stuck in this bowl,” he said. “It may slosh around a bit, but it can’t get over the rim of the bowl.”

But occasionally, the Arctic undergoes a bout of sudden stratospheric warming, where the layer in the atmosphere between 5 and 30 miles above the ground starts to heat up. This happens roughly six times per decade as part of a pattern of typical climate variability. Scientists saw this warming starting to happen earlier this year.

Keep in mind that “warm” air by Arctic standards is still frigid by comparison to common temperatures closer to the planet’s equator. Average temperatures in February in the Arctic are around minus 4 degrees Fahrenheit or minus 20 degrees Celsius.

As Arctic air warms, it becomes less dense and more energetic. “As you warm the Arctic, now that cold air is less cold and it’s closer to the rim of the bowl,” Meier said. “It can more easily break out over the bowl and cause these kinks in the jet stream.”

Another factor at work in the recent cold snap across the US is known as the Arctic Oscillation. This is a pattern of variability in the winds that encircle the Arctic. The cycle is currently in its negative phase, leading to a weaker jet stream with slower air currents. Sometimes the jet stream can even reverse direction from its normal west-to-east flow. Its typical circular route becomes wobbly, with lobes that reach farther south across the planet.

When that chilly air spreads farther south, it brings with it severe winter weather. Exactly where the lobes of the jet stream will reach down and bring cold air can vary across the globe. It just so happened that the United States was in the path of the current perturbation.

What does climate change mean for extreme cold events in the future?

Clearly, a complicated array of variables had to align to produce the severe cold across the US this week, and such alignments don’t happen very often, making them hard to study, and even harder to predict into the future.

That future is further obscured by climate change. Generally, scientists expect that winters will warm faster than summers across the US. More heat records will be broken in the coming years than cold records.

So do warmer winters mean that extreme cold events will become less likely, or does a warmer Arctic mean that a wobbly jet stream will shroud lower latitudes in chilly air more often? And is what we’ve seen so far due to natural variability, or is it part of a larger human-driven trend?

Jennifer Francis, a senior scientist at the Woodwell Climate Research Center, co-authored a 2018 study that found warming in the Arctic is linked to more frequent extreme winter weather in the United States. In a 2020 study, Francis and her co-authors also noted that observations and computer models seem to come to different conclusions about the role of Arctic amplification in extreme winter weather closer to the equator.

In an email, she said that the bitter chill across the US right now is a sign of what’s to come. “The large, persistent, southward dip in the jet stream responsible for this cold invasion is likely to happen more frequently in a warming climate, as are the warmer-than-normal spells that sit alongside this dip,” Francis said.

“That’s what’s happening now, and these wavy jet streams are expected to occur more often as we continue to warm the planet, especially melt the Arctic,” Francis said.

However, other researchers are more skeptical about the connection between climate change and increasing extreme cold events.

James Screen, an associate professor of climate science at the University of Exeter, co-authored a 2020 paper that argued that “the Arctic influence on mid-latitudes is small compared to other aspects of climate variability.”

That’s not to say that there definitely isn’t a connection between warming in the Arctic and cold weather extremes closer to the equator. Rather, the evidence to date doesn’t demonstrate a large enough effect to overwhelm the overall warming caused by increased greenhouse gas emissions, according to Screen.

At the same time, sustained wintertime warming due to climate change and an increase in polar vortex spillovers to lower latitudes are not necessarily in opposition, as Stefan Rahmstorf, head of Earth System Analysis at the Potsdam Institute for Climate Impact Research, pointed out on Twitter. Winters can warm up over the long term while the polar vortex may spill over more frequently in the near term.

Even as the planet warms, there will still be cold days, even extremely cold days. This year’s winter in the US is likely just a dip in an overall upward trend in winter warming. “You are still going to have a winter here and there that is going to be an outlier to these other trends,” Gleason said. It’s just that eventually, the coldest days will be fewer and farther between.

All Rights Reserved for Umair Irfan