A petite desktop microphone with an impressive sound.

As late-night hosts like Stephen Colbert and Seth Myers have proven throughout the COVID-19 pandemic, you don’t need a lot of technology to broadcast yourself to the world. They’ve often done it with little more than an iPhone, while podcasters and other content creators tend to rely on a decent desktop microphone. For years, a small handful of USB mics have ruled the earth. Now, established audio brand Rode is trying to make some room for itself on your desktop as well. Is the Rode NT-USB Mini a worthy competitor to microphones like the Blue Yeti? Let’s find out. 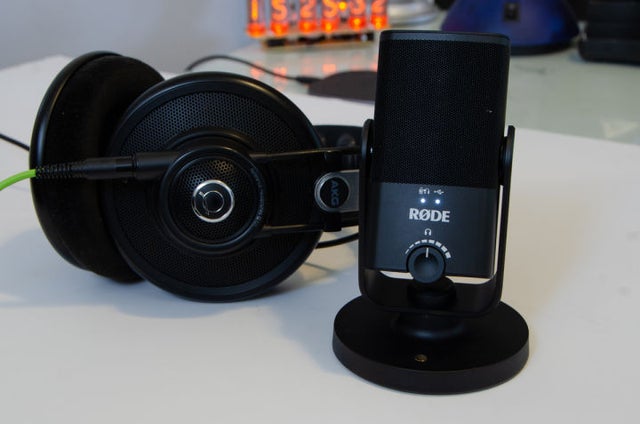 The first thing you notice looking at the NT-USB Mini is just how “mini” it actually is. Standing just 5.5 inches high and sitting on a base that’s 3.5 inches in diameter, it seems more like a scale model of a microphone than a functional desktop mic. In fact, set the mic next to the Blue Yeti (which admittedly is needlessly oversized), and the difference in stature is almost comical.

And while there is a non-mini in the Rode lineup, the NT-USB Mini is not just a shrunk down version of the larger NT-USB; it’s an entirely different audio product in almost every meaningful way. The Mini is its own deal, for better or worse.So what is that deal? Well, the build quality is fabulous. The mic – small enough to fit in the palm of your hand – weighs 21 ounces, which makes for a heavy, solid-feeling rig. It’s made of a combination of steel and reinforced nylon resin, and nothing about it feels cheap or flimsy. The upper half of the mic is fully wrapped in a metal mesh grille, and the lower half is extremely minimalist. On the front you get a single dial and two status lights; in back there’s a 3.5-mm headphone input and a USB-C port.

The dial is not the microphone gain; in fact, the mic has no gain control whatsoever, and you need to adjust that at your PC or device. Instead, the dial controls the audio level in the headphone monitor (which, incidentally, is a zero-latency audio monitor). The dial is stiff – almost too stiff, because you need to get a grip on the mic just to turn the dial with your thumb – and spins well past the marks on the mic face in both directions. You can toggle the audio monitor on and off with a push of the dial.

The two status lights tell you when the zero-latency monitor is on and when the microphone is powered via the USB-C port. Kudos to Rode, by the way, for supporting USB-C. It’s much easier to plug into the back of the mic than micro-USB, especially in the dark.

The mic is permanently mounted on a U-bracket that, thanks to the magic of magnets, snaps authoritatively into the stand with little effort. Want to mount the mic on a stand or boom arm? Pop the rubber grommet out of the bottom of the U-bracket and insert the included 3/8-inch adapter.

The first time I used the NT-USB Mini and its magnetic stand, I was almost giddy with how clever it all seemed. But it didn’t take long for me to have some quibbles. Because of a notch in the base, the mic only goes on the stand in one orientation, and there’s a chrome divot on the stand to remind you where to orient the front of the mic. But why? The stand is completely symmetric, so without the self-imposed notch, the mic could snap on in any orientation. That’s annoying. Rode made it weirdly difficult to put the mic on the stand, as if they looked at the almost-but-not-quite-symmetric USB plug design and said, “we should replicate that on a larger scale.”

The most important part of the microphone is obviously on the inside. Unlike do-it-all microphones like the Blue Yeti, Rode built the NT-USB Mini with a single capsule, so it has exactly one mic pattern: a cardioid polar pattern that is sensitive to audio in front of the mic and rejects audio to the side and rear.

Since it only features one pattern, Rode’s engineers were no doubt able to put a higher quality mic in the NT-USB Mini, since they didn’t have to worry about fitting two or three capsules under the hood. The specs bear that out; it records in 24-bit, features a 20Hz – 20kHz frequency response, and manages 121dB SPL at 1% THD.

I ran the mic through its paces mainly as a voice mic for podcasting. My day-to-day mic is the Blue Yeti, which I enclose in an open-box with baffling, and I keep a pop filter mounted in front of the mic. For the NT-USB Mini, no pop filter is required because Rode integrated a filter internally. In fact, it prevented plosives pretty effectively, always giving me very smooth audio recordings.

Unfortunately, the microphone’s core conceit quickly exposed a serious problem. Since it sits only 5 inches or so high, using it was, well, a literal pain in the neck. Most mics work best when you’re virtually eating them, and the NT-USB Mini seems to do best when you’re about 3-4 inches away. Pull back even a foot, and the deep, warm tone you get from vocal audio rolls off dramatically into a thin sound that lacks bass and mids. This mic wants you to be close.

But how do you do this when the mic is only 5 inches high? I propped it up with books and boxes, but that made it challenging to fit it in my baffle box. The bottom line: As cool as the mic looks and how compact it is, this isn’t a mic I could use without mounting it on a boom arm, so I could position it right where I need it.

Getting past the problem with its mini-ness, the NT-USB Mini performed admirably. As I alluded to, the audio is warm and full, with a healthy mid that makes vocal audio sound great. You do need to stay close, though, and the mic’s response falls off dramatically near the east and west coordinates. Moreover, it hears almost nothing behind. That’s an advantage if you’re recording on your own in a room that might have ambient sounds beyond your control. But if you need to do face-to-face interviews, a single NT-USB Mini is not going to get the job done.

One other frustration: the mic has no mute button, which I didn’t realize how much I would miss until I started testing the Rode. You’ll need to mute via software, if that’s a possibility with the app you’re using to record.

All Rights Reserved for IGN