A tiny, invasive bug and the climate crisis are changing how guitars are made and shifting the course of music history

In 1970, when Led Zeppelin’s Jimmy Page recorded the iconic solo on “Stairway to Heaven,” he was playing a 1959 Fender Telecaster.

The guitar was gifted to Page in 1966 by the guitar legend Jeff Beck, who used it himself in the later years of the Yardbirds. Page repainted the guitar, adding an elaborate design of red, green, orange, and blue on the body that vaguely resembled a dragon, giving the instrument its name.

The body of Page’s renowned Dragon Telecaster was made of ash wood, a longtime favorite for many of rock music’s biggest names.

But now, the trees that ash is harvested from are on the decline, and could soon disappear.

A small, invasive bug and excessive flooding are threatening the wood — and, by extension, the sound that epitomizes rock ‘n’ roll — serving as yet another reminder of the climate crisis and its wide-ranging impact.

“It’s really heartbreaking,” Norvell said. “It’s one of the main woods we rely on.”

The shortage of ash prompted Fender to phase out its use after a 70-year run. The wood is now only available to customers willing to pay a premium for it.

“Fender has used ash for many, many years,” Norvell told Insider. “It goes back to the company’s origins in the late 40s.”

Leo Fender used ash in the early 1950s in some of Fender’s first Telecasters and Stratocasters, guitar models that remain among the most beloved electric guitars. At the time, Fender went with ash for two reasons: it was cheap and available.

But it also happened to have a nice sound, which, together with the low cost, helped Fender become the “Henry Ford of electric guitars,” according to Craig Snyder, a professional guitar player, collector, and high-end instrument dealer. In the early days of rock ‘n’ roll, Fender mass produced guitars and sold them at affordable prices. The use of ash persisted, enjoying a decades-long run as one of two primary body woods Fender used for its electric guitars.

And it’s not just Fender. Snyder, who has played professionally with legends like Elton John and Roberta Flack, said Fender “set a platform for guitar design” that countless other builders still follow.

“Fender really made ash a bedrock of guitar-making,” Snyder said.

Fender-style guitars, even when not made by their namesake manufacturer, are among the most popular electric guitars and many still use ash.

There are dozens of species of ash trees native to North America, but the most popular for guitars is green ash, or Fraxinus pennsylvanica. It grows across much of the United States and Canada, from Nova Scotia down to Florida and as far west as Alberta and eastern Texas. But the green ash most prized for electric guitars grows in the south, in the bottomlands of the Mississippi River.

“We like lightweight ash, called punky ash or swamp ash,” Norvell said. “It’s wood that is submerged for part of the year in swamps. When the floods recede, we go in and you can harvest the ash.”

As a result of growing in standing water, swamp ash is lightweight and soft. It’s famous in rock music for giving the guitar a sweet, clear and resonant sound. And while average listeners are unlikely to decipher the tonal characteristics of different types of wood, some players and makers say they can tell when a guitar is made of swamp ash.

“True swamp ash is real ringy,” said Stephen Marchione, who has been making high-end guitars for some of the world’s best players for more than 30 years. Marchione said in addition to its sound, swamp ash’s light weight is especially desirable, adding it can knock off nearly five pounds from a guitar.

“It might not sound like a big difference, but when it’s strapped around your neck for two hours it’s a lot,” he said.

Ash also has a beautiful, striking grain pattern, so it’s often used on guitars with a natural or transparent finish.

A climate crisis and a tiny, shiny pest

In recent years, the floods in the Mississippi Delta have been receding less frequently, limiting the swamp ash that can be harvested and disrupting Fender’s ability to get it.

Mike Born, the former director of wood technology at Fender, looks at the water levels of the Mississippi River every day. He currently works as a wood consultant and salesperson for Anderson-Tully, the lumber giant that supplies most of the swamp ash used in guitars, including to Fender.

Born said the high water levels are driven by snowmelt and heavy rains, and not just over the Mississippi, but from all the rivers that feed into it as well, like the Arkansas, Illinois, and Missouri.

Scientists say extreme precipitation is one of the impacts of the climate crisis. According to the Environmental Protection Agency, precipitation has steadily increased over the past century. In 2019, the Mississippi River experienced one of its worst-ever flooding events due to frequent heavy rains. That year was the second-wettest on record for the US, according to the National Oceanic and Atmospheric Administration.

The unpredictable flooding and receding has created a feast-or-famine effect. Some years, swamp ash can’t be harvested at all. In years when it can, makers like Fender stock up on as much as they can get, but that cycle, Norvell suggests, appears to be ending. He offered his assessment of the latest healthy supply of swamp ash, calling it “one of the final feasts of having a bounty of ash wood.”

There’s another factor compounding the problem: a shiny green beetle about the size of a grain of rice.

Native to East Asia, the emerald ash borer was first detected in the US in 2002 and has since decimated ash trees, killing tens of millions across the country.

The invasive bug likely arrived in the US on shipping pallets from China, but early efforts to contain it were unsuccessful. Infestations were discovered in 35 states, and scientists say it’s the most destructive pest ever to plague America’s forests.

After the emerald ash borer lays its eggs on the bark of an ash tree, larvae bore into the tree and feed on its tissues, disrupting the movement of water and nutrients in the tree and leaving a squiggly trail in its wake. It ultimately kills the tree, and the trails left behind make the wood harder for guitar makers to work with because they have to cut around the markings.

While the flooding is causing the most recent swamp ash shortages, ash trees could soon disappear altogether because of the beetle. “It’s a mass-extinction event,” Born said, adding that without intervention, ash trees could be extinct in North America within a decade.

“With that, combined with the flooding in the last couple years, we just got to a point where in good conscience we could not maintain a stable supply of healthy quantities of ash,” Fender’s Norvell said.

In April 2020, after seven decades of making ash-bodied guitars, Fender announced it would phase out the wood, reserving it only for premium and historical models.

Norvell said it was an “unbelievably hard decision” for the company. “There’s an element to this that it’s the end of an era,” he said.

Boutique guitar makers are still able to get swamp ash in the quantities they need, so professional musicians and gearheads who are set on swamp ash can find it, at least for now, but its status as a go-to, everyday wood is quickly changing. 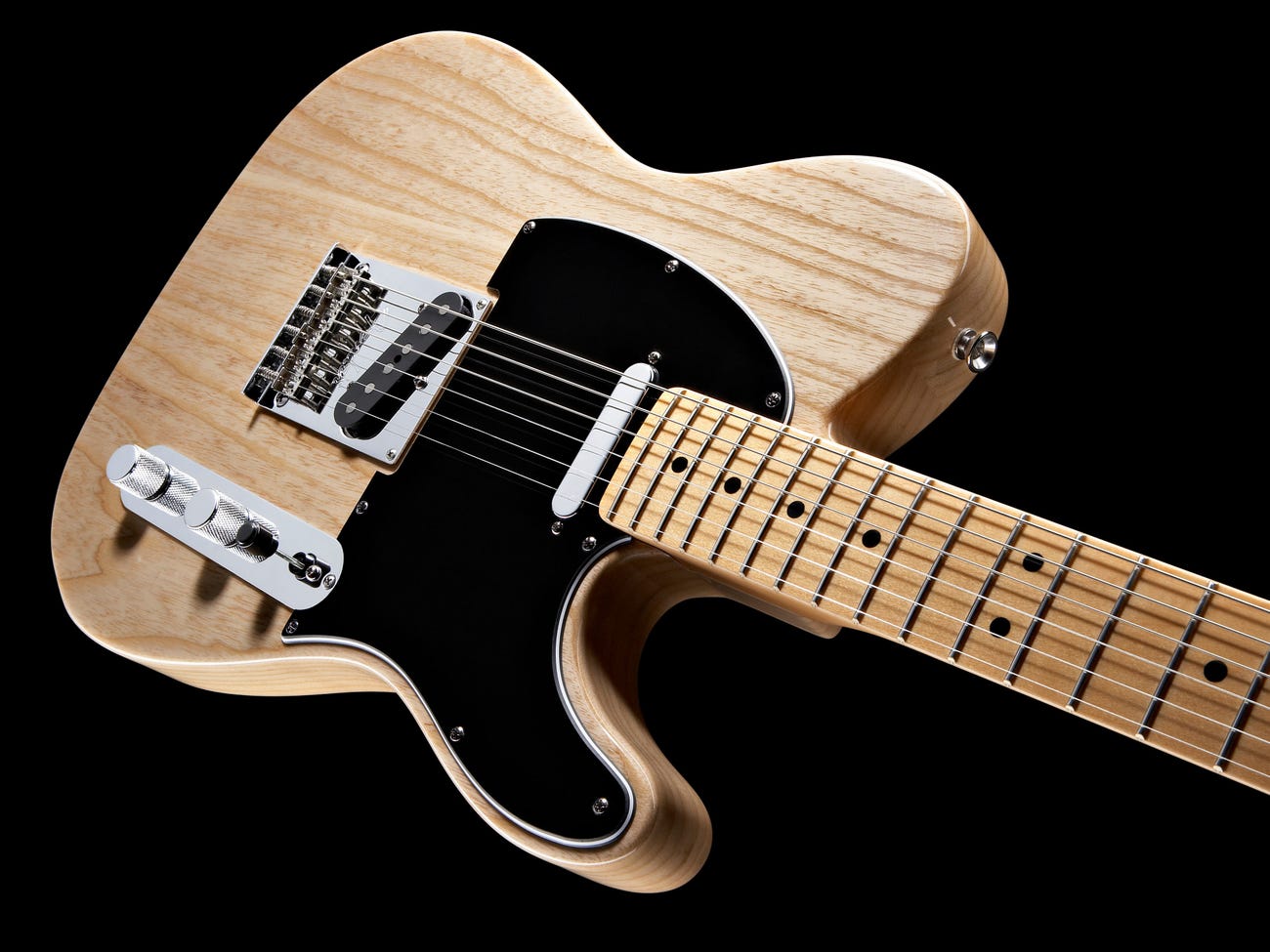 Fighting to preserve ash trees, while looking for alternatives

Roots of Rock, a collaborative initiative between the US Forest Service, Fender, and the nonprofit American Forests, is working to save America’s ash trees from the emerald ash borer. Researchers have identified “lingering ash trees” that survived infestations after all other ash trees had died.

“We’re taking survivors that had natural resistance and breeding them with each other to produce a green ash species with resistance,” said Born, who helped start the project when he was at Fender.

Plans are underway to plant the first of these trees in Detroit, near where the beetle was first detected in the US. Even if successful, the project will ultimately take decades, but Born said it’s the first step.

“At least they’re going to save ash genetically and they didn’t have to hybridize,” he said. “This is pure American green ash.”

Roger Sadowsky, a renowned instrument maker, has been building electric guitars for legendary musicians since 1979. When he first started researching, all the best musicians he consulted had Fenders from the late ’50s and early ’60s that were lightweight, which meant they were likely made of swamp ash.

Sadowsky said the last few months of 2020 he was calling every wood guy he knew to find ash. More recently, when it was available, he was stockpiling it to get through the next drought. But to compensate for the shortages, he’s been running listening tests to find a replacement. He has tested eight guitar bodies made of alternative lightweight woods.

“Ash is still the best sounding to my ears,” Sadowsky said. “What we’re trying to do is find the runner-ups as alternatives to swamp ash.”

The leading contender so far is eastern white pine, another tree native to North America that primarily grows in the Northeast and around the Great Lakes. Sadowsky said the white pine is best after it has been torrefied, a roasting process that emulates decades of natural aging.

Fender has also employed a torrefaction process with pine as a replacement for ash. Norvell said it has been very well-received, though there’s still a “wistfulness and nostalgia” for swamp ash.

According to the guitar-maker Marchione, musicians are extremely conservative when it comes to their instruments. “People are still trying to recreate what guitarists like Eric Clapton and Jimi Hendrix did,” Norvell said. “Those guys had plenty of swamp ash.”

But Born said the deep love for the storied wood could, in some ways, be a chicken-and-egg scenario, rather than there being an inherent magic in the wood.

“I think it’s more that rock ‘n’ roll grew up with that as being the sound, so that wood became the tone that people like to hear,” he said. “It could’ve been something else and that wood might have had the same kind of myth to it.”

Regardless of the reasons, swamp ash is woven into Fender’s DNA, and the history of electric guitars in general. But Norvell said now it’s about finding the next generation of woods.

“The guitar continues to adapt and adjust, and the music people make changes. Everything changes over time,” he said.

“For us, now it’s about finding new voices and new tones and new woods.”

All Rights Reserved for Kelsey Vlamis