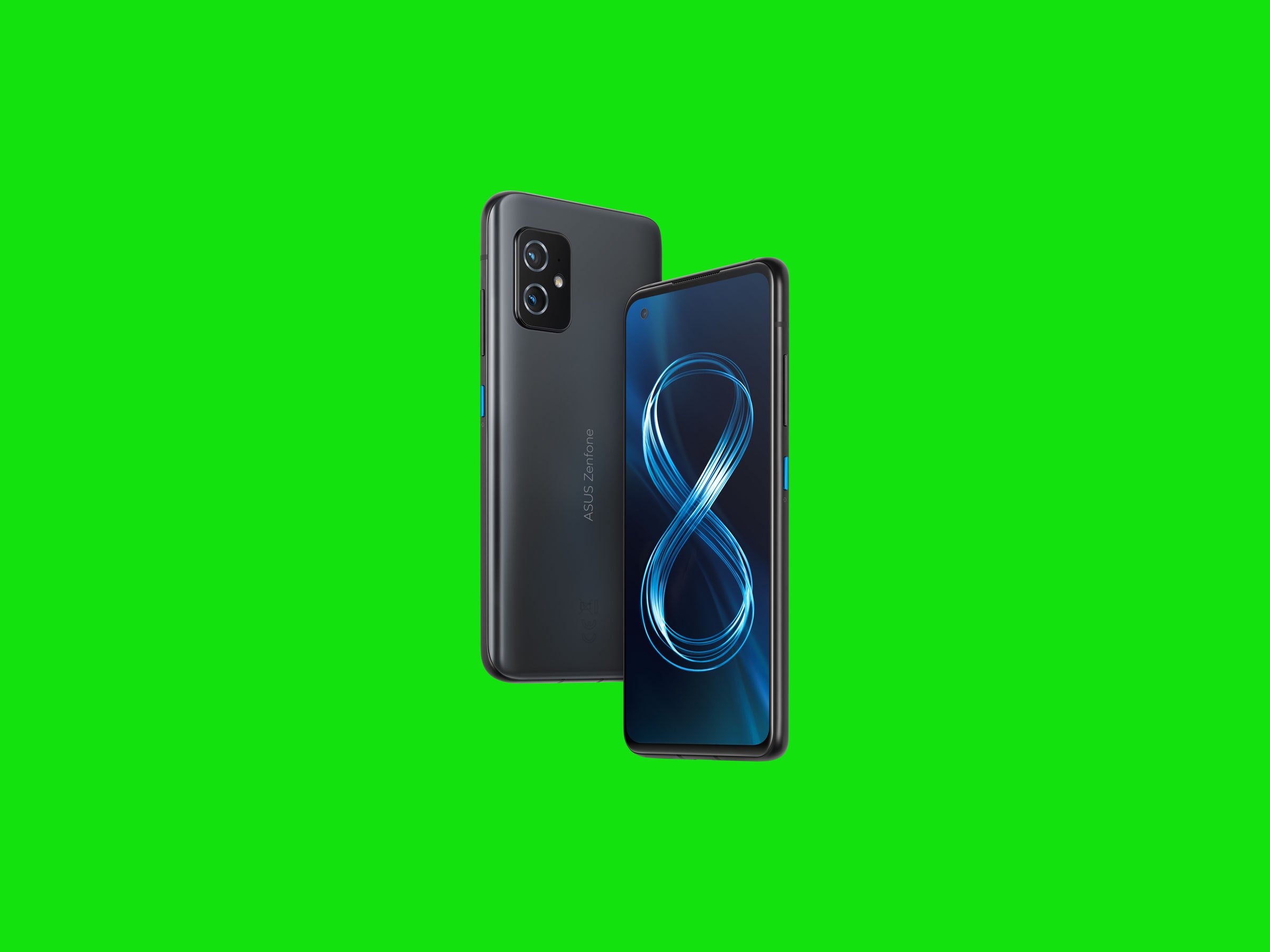 Unremarkable and unmemorable. That’s how I’d describe the Zenfone 8, Asus’ latest  Android smartphone. That doesn’t mean it’s a bad phone. It has a high-end processor capable of speedily running any and every app I want, with a compact design that makes it easy to use with one hand. It also doesn’t cost a thousand bucks. Depending on the configuration, it ranges between $599 and $799 (though Asus says pricing isn’t final).

However, there’s no style behind the substance. There are very few perks that distinguish the Zenfone 8 from its peers. If I looked up boring in a dictionary, I’d expect to see a picture of this phone. It’s so dull, which is surprising considering it’s from the same company that made the flashy ROG Phone 5. But hey, sometimes generic wins.Delivering the Goods

Compare the Zenfone 8’s specs with pricier phones from OnePlus and Samsungand it’s easy to be impressed. It’s got the same flagship Qualcomm Snapdragon 888 chip inside, with 8 gigabytes of RAM and 128 gigs of storage (there’s also a 256-GB model available). Support for Universal Flash Storage 3.1 also means it can match its peers in read/write speeds for faster app and game load times.

That kind of power and speed isn’t easy to find at $599. You never have to worry about your favorite games stuttering, or lag when switching between apps. You even get a high 240-Hz touch sampling rate (the measure of how quickly the touchscreen registers the tap of your finger). Paired with the 120-Hz screen refresh rate (the number of times the display refreshes to show you a new image), scrolling through apps like Twitter and playing titles like Oddmar feels smooth and responsive.

Better yet, if today’s phones are too big for you, then the Zenfone 8 will feel satisfying. It’s no iPhone 12 Mini, but it’s about the same size as Google’s Pixel 5. I can reach all parts of the 5.9-inch screen with my thumb. That’s special because there aren’t many small Android phones these days, let alone ones with flagship performance.

Speaking of the screen, the AMOLED panel is sharp and colorful, though I wish it could get slightly brighter outdoors. It’s protected with Corning’s ultra-tough Gorilla Glass Victus, and the back is Gorilla Glass 3. You definitely need a case because you will drop this phone; the matte texture on the back is super slippery! Thankfully, the glass coating has proven to be surprisingly durable. I’ve dropped the phone three or four times now, and there are hardly any scuffs or visible signs of damage. I still wouldn’t press my luck going caseless.

There’s a 4,000-mAh battery cell in the Zenfone 8, and it usually gets me through a full day, but just barely. If you’re on TikTok for hours on end, you’ll probably need to plug in before bedtime. (These results are with the Always-On Display and the 120-Hz screen turned on; toggle these off and you might extend the battery life to the morning of a second day.)

It doesn’t recharge as quickly as other flagships, but you can get a little more than 50 percent in 25 minutes with the included 30-watt plug-in charger. I like that Asus has included some of its battery-minded features of the ROG Phone 5 here, like the ability to charge the phone at a slower pace and to cap charging at 80 or 90 percent—both of which will, over time, help to elongate the battery’s lifespan.

Asus utilizes its Game Genie software here too. While playing a game, swipe to the right from the edge and a slide-in menu will let you do gamer-friendly things like disable notifications and calls, capture highlight videos, better optimize RAM, create better controls, and activate a screen recorder.

The high-end features don’t stop there. The Zenfone 8 packs dual speakers that get loud and sound good, a headphone jack(!), support for the Wi-Fi 6 standard, and IP68 water resistance. There’s 5G support as well, though you’re restricted to the lesser type of 5G called sub-6; there’s no millimeter wave for super-fast 5G speeds. Honestly, millimeter wave is still sparse in the US, so you’re not missing much.

If you buy something using links in our stories, we may earn a commission. This helps support our journalism. Learn more. Please also consider subscribing to WIRED

One small perk? There’s a tiny LED indicator on the bottom edge of the phone. It flashes whenever you have a new notification (or when you plug it in to charge), which is a nice alternative to the battery-hogging Always On Display for seeing alerts.

Unfortunately, the phone does omit some key features. It lacks a MicroSD card reader, so you can’t expand on the base storage if you need to make room for more photos or other media. There’s also no wireless charging. There is an in-display fingerprint sensor, but its accuracy is hit or miss.Two Potential Bugs

During the month I’ve been using the Zenfone 8, I’ve run into only two bugs, but they’re big. The first is a problem with 4G LTE/5G connectivity. Every time I leave my home Wi-Fi network, the phone has trouble connecting to the mobile data network. I need to manually turn off mobile data and turn it back on for it to connect, and I need to do this every so often when I’m outside. It’s annoying.

This is also the first phone I’ve tested in a long time where multiple people have repeatedly mentioned issues hearing me on calls. (Yes, you can make phone calls on it!) I don’t have issues hearing other people, but others have said they couldn’t hear me at times.

Asus says it just might be a problem with my unit. I also asked several other reviewers who have tested the same model, and I’m the only one with these woes. I’ll be receiving another test unit soon, so I’ll update this section if the issues don’t show up on the replacement handset. In any case, these are still potential bugs for final retail models, so if you see them in yours, make sure to return the phone.For Small Phone Lovers

As for the rear cameras, the Zenfone has a 64-megapixel camera paired with a 12-megapixel ultrawide. The results don’t dazzle but are satisfactory. With the dedicated Night mode, you can take solid low-light images, and the ultrawide offers up some versatility, though it’s best used in the daytime. The 12-megapixel front camera is less impressive; selfies often look washed out and lacking in detail.

Most of the time, I preferred the results captured on Google’s $500 Pixel 4A 5G(which has the same camera as the Pixel 5) over the Zenfone. The Pixel’s shots were frequently a good deal sharper. Look closely at the comparison images of the food. Switching between them feels as though you’re donning prescription glasses to look at the Pixel’s photo. You can pick up so many more details.

As for video capability, you can film at 8K on the Zenfone, but the resulting file sizes are huge and there’s not really a good place to share 8K footage just yet. Also, Asus’ editing software doesn’t let you crop into the clips, so you can’t zoom in and still retain 4K quality without using a third-party editor. (This is something you can do on Samsung 8K-capable phones.) Stick to 4K at 60 frames per second—the quality is pretty good!

For most people, I think the Pixel 5 is a better buy at just $100 more. (Or wait for the upcoming Pixel 5A, which will be cheaper.) Sure, you don’t get the speediest processor around, but the performance is still great, the camera system is more capable, and it’s similarly compact. It works on Verizon’s network, unlike the Zenfone, and while you only get a 90-Hz screen, it does have better battery life. Google also stuffs its phone with more helpful software features. And critically, you will get consistent Android upgrades and security updates with a Pixel phone; regular software updates aren’t one of Asus’ strong suits.

That said, you’re not going to lose out on raw performance if you go for the Zenfone 8, which launches later this summer. And if you feel the compact design and the headphone jack would outweigh its other shortcomings, you’ll still have a capable phone in your pocket.

All Rights Reserved for Julian Chokkattu