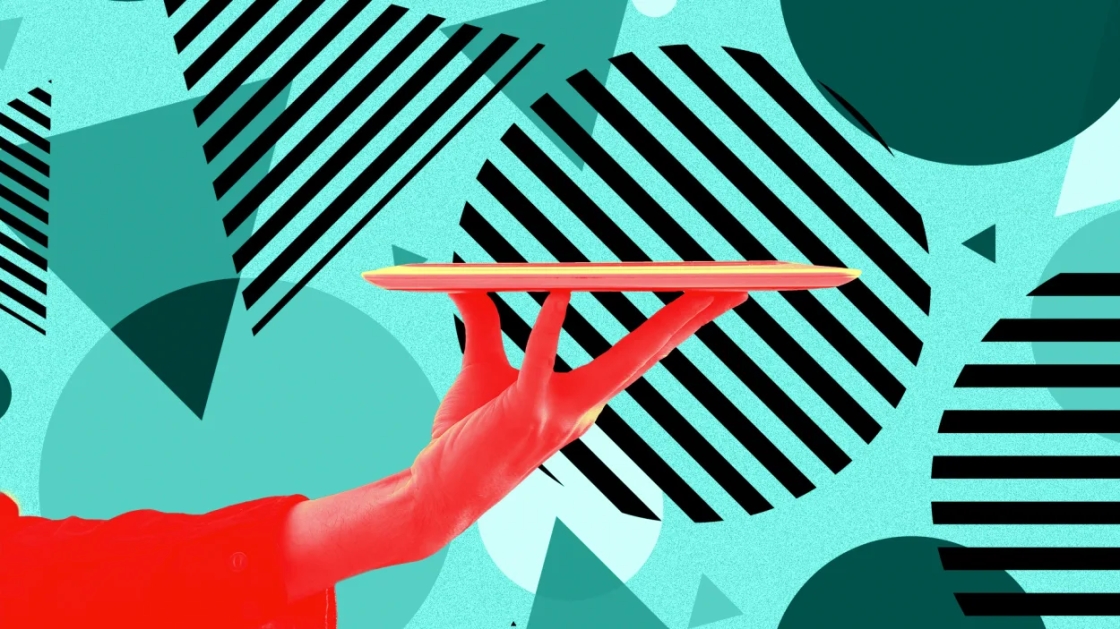 Here’s how to use an iPad like a laptop, wrangle your documents, automate tasks with shortcuts, and more.

Every year, the idea that the iPad is insufficient as a productivity device becomes staler.

That’s because Apple keeps making the iPad increasingly laptop-like, with features like trackpad support, a full-blown file browser, and multitasking. At the same time, the company has imbued its tablet with capabilities that you won’t find on a laptop, such as Pencil support for sketching and the Shortcuts app for automation.

Now that Apple has released new iPads along with iPadOS 14, let’s look at all the ways you can turn the tablet into a productivity powerhouse.

Add a keyboard and cursor: Got a Bluetooth keyboard and mouse handy? Pair them with your iPad to turn it into a miniature workstation. Got a 2018 and 2020 iPad Pro (or are planning to get the upcoming fourth-gen iPad Air)? Apple’s Magic Keyboard accessory lets you snap on a keyboard and trackpad for using your tablet like a laptop, while Logitech’s Folio Touch provides a cheaper alternative. For other iPads, like the baseline iPad, 2017 iPad Pro, and third-generation iPad Air, Logitech’s Combo Touch gives you a keyboard, trackpad, and kickstand for the tablet all in one package.

Know your shortcuts: Once you’ve connected a keyboard, use shortcuts to get around faster.

Get a grasp on trackpad gestures: If your keyboard has a trackpad, you can also use multitouch gestures to navigate around the iPad:

Tweak your cursor settings: If your mouse or trackpad doesn’t feel quite right, head to Settings > General > Trackpad (or Trackpad & Mouse), where you can adjust tracking speed, reverse the direction of scrolling, enable trackpad tap-to-click gestures, and reverse your mouse buttons.

Right away, you’ll be able to navigate the entire system with arrow keys and use new shortcuts such as Tab-C for Control Center, Tab-N for notifications, and Tab-S for Siri. You can also view, modify, and create new keyboard shortcuts under the “Commands” section in the Full Keyboard Access menu.

Use desktop websites: If you’re feeling constrained by a particular iOS app, try using the web version instead. Apple’s Safari browser on the iPad can load full desktop versions of sites such as Gmail, Tweetdeck, and Airtable. Those sites are often more capable than their mobile app counterparts, especially when paired with a trackpad and keyboard for right-click menus and shortcuts.

To make those sites more readily accessible, add them as bookmarks on your iPad’s home screen. In Safari, press the Share button, then select “Add to Home Screen.”

Make the most of the Pencil

Scribble anywhere: With the new Scribble feature in iPadOS 14, you can use the Apple Pencil to write anywhere that accepts text entry, and the iPad will convert your handwriting to text. It’s great for quickly entering text without putting your Pencil down. Once the iPad has converted some handwriting, here are some extra tricks to know:

If you’d rather switch to the keyboard while scribbling, just hit the keyboard icon in the floating menu at the bottom of the screen. And to disable Scribble entirely, head to Settings > Apple Pencil.

Take a note faster: To jump straight into Apple’s Notes app from the lock screen, just tap in the middle of the screen with your Pencil. By default, this will create a new note every time, but you can change this under Settings > Notes > Access Notes from Lock Screen. You can also add a Notes shortcut in Control Center by heading to Settings > Control Center and hitting the green + icon next to Notes.

Make perfect shapes: Apple’s Notes app can automatically recognize shapes such as squares, circles, arrows, and lines. Just keep holding the Pencil down for a moment after making a shape, and your sloppy drawings will turn into perfect geometry.

Newer Apple Pencil tricks: With the second-generation Apple Pencil, you can double-tap on it to switch between drawing tools in supported apps. This will switch to an eraser by default, but you can change this under Settings > Apple Pencil.

Add a battery widget: To avoid getting stuck with a dead Pencil right when you need it, add a battery status indicator to your widgets list. At the bottom of the list, hit Edit, then hit +, then select “Batteries” from the list and hit “Add Widget.” Now you can see exactly how much charge is left at a glance.

Customize your dock: On the home screen, press, hold, and drag apps down to the bottom row to keep them in your dock. By default, some recently used apps will appear in the dock as well, but you can disable this under Settings > Home Screen & Dock.

View two apps in split-screen: To use the iPad’s Split View feature—which works with a high percentage of popular apps but isn’t universally supported—make sure you have one app open, then press and hold another app in your dock and drag it up so the icon moves with your finger. (If the app isn’t in your dock, you can hit Cmd-Space to search for it, then drag the icon in the search results.) Move it to either side of the screen, then let go once the other app slides over to make room. Adjust the split-screen by dragging the black bar between the two apps, or drag the bar to either edge of the screen to close the other app.

Open a mini app: Instead of moving your second app to the edges of the screen, try dropping it into the middle. This will open a miniature app window (called “Slide Over”) that appears on top of your main app. Dismiss this app by swiping the top bar to the right of the screen, or drag on the top bar to move it around. Dragging it to the top edge will open it in full screen, and dragging it to the sides will open it in Split View.

Use the same app twice: Multitasking doesn’t merely apply to separate apps. In some cases, you can also have two instances of the same app running side by side. Not every app supports this, but it’s great for viewing separate web pages in Safari or comparing documents in Word. Opening a second instance of one app works the same way as multitasking with two separate apps: Just drag the app onto your screen from the dock or from Cmd-Space search results.

Get familiar with Files: For full-blown file management on an iPad, use Apple’s Files app. Here you’ll find files saved by your apps—located under either “On my iPad” or iCloud Drive, depending on how the app stores files. Long-press or right-click any file for a menu of options, such as duplicating the file, moving it to another location, or adding it to a compressed Zip file.

Take note of the icons at the top-right corner of the Files app as well; these’ll let you create new folders and switch between different views.

Connect cloud storage: The Files app isn’t just for documents you’ve stored on the iPad or in iCloud. You can also link other cloud storage services such as Dropbox, OneDrive, and Google Drive. That way you can move files between locations or open them in other apps.

To link a service, make sure that you’ve installed and signed into corresponding app on your iPad. Then, in the Files app, hit the “…” button in the left sidebar and select “Edit Sidebar.” From here you can toggle on the services you want to access through the Files app.

Add favorite folders: Instead of digging through endless directories to access your files, you can mark certain folders as favorites to make them show up in the left sidebar. This even works with cloud storage sources you link (per the tip above). Just long-press any folder and select “Favorite” for quicker access.

Scan your paper documents: While there’s no shortage of paper scanner apps on the iPad, Apple also has a free one built into the Files app. In the left sidebar, tap the “…” icon and select “Scan Documents,” then use the camera to scan each page of your document. Apple will automatically crop each image, and you can save the resulting PDF file to the directory of your choosing.

Do more with Shortcuts

Use some basic shortcuts: Apple’s Shortcuts app is a powerful way to automate actions within apps on your iPad. On the most basic level, you can have Shortcuts for things like creating a new email, launching Google Assistant, texting a favorite contact, or shortening a link. You can then launch these actions through the Shortcuts app, create icons or widgets to launch them from your home screen, or in some cases access them via the Share menu within apps.

The easiest way to get started is to visit the Gallery section of the Shortcuts app, where you’ll find suggested Shortcuts from Apple. Take a look at the “Shortcuts from your apps” section in particular, which will list some quick actions you can take within the apps you use most.

Search for more advanced shortcuts: Apple’s Gallery only begins to cover what’s possible with Shortcuts. For more advanced automation, check out some online communities such as RoutineHub, ShortcutsGallery, and Shortcut Hub, which host all kinds of Shortcuts you can add to your own iPad. One particularly impressive example: A Shortcut that automatically adds the weather, calendar events, and reminders to your lock screen.

Run shortcuts with your keyboard: After setting up some useful Shortcuts, you can map them to your keyboard for even quicker access. Just head back to the Full Keyboard Access menu (under Settings > Accessibility > Keyboard), then select Commands and scroll to the bottom of the list, where you’ll find all your shortcuts. Tap on any Shortcut, then enter the key combination you’d like to associate with it. You might, for instance, use Ctrl-G to launch Google Assistant, or use keyboard shortcuts to open certain apps such as Safari or Gmail.

The only quirk to this trick is that you must engage keyboard most first by pressing any key, then type the shortcut you want to use. But once you’ve started mapping custom actions to the keyboard, you might wonder how you went so long without it.

All Rights Reserved for  Jared Newman